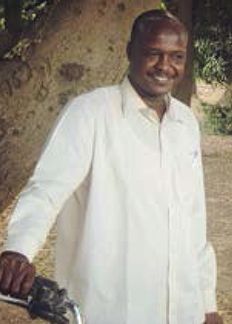 Zalingei, Sudan (March 17, 2014) — Abdullah Jidah and his colleagues at the Zalingei Youth Committee are hopeful for the future. They have courage, resourcefulness, and a tenacious vision for a peaceful Darfur.

Their budding movement is called “Youth of the Tribes.” Their members number 75 in the village of Zalingei and 500 throughout the State, representing 35 different ethnic groups.

Committee leader Abdullah and others are making their vision for peace a reality using conflict resolution skills learned from the Near East Foundation (NEF) through a project funded by the Darfur Community Peace & Security Fund (DCPSF).

Abdullah and many of the new movement’s members are among 385 people who participated in 14 leadership and conflict management training workshops. The approach was developed in partnership with Syracuse University’s Program on the Advancement of Research on Conflict and Collaboration.

The trainings are a component of a larger project bringing diverse communities together to manage shared natural resources that are so often a flashpoint for tensions.

Empowered by their conflict resolution training, Abdullah and others traveled 60 kilometers to the village of Traige to meet with key members of the warring ethnic groups and deliver their message of peace. Violence there caused many to flee their homes and join Darfur’s 1.8 million internally displaced population.

Leaders from opposing groups gathered to hear Abdullah make a passionate speech about the impact of conflict and the need to stop the fighting. Afterwards, leaders from both sides admitted they were ashamed that it took a group of young people to get them to think more seriously about the importance of peace, the destructive nature of their feuds, and the need to stop the cycle of retaliation that perpetuates violence in Darfur.

Abdullah’s plea for peace inspired the change he and his group had hoped for—there have been no incidents of conflict reported in four months in Traige.

Meanwhile, NEF trained community leaders from more than 20 villages are using the inclusive approaches to conflict resolution introduced in the workshops to manage disputes that do arise, and to inspire more young people like Abdullah in the cause of peace.

The Near East Foundation is a U.S.-based international NGO leading innovative social and economic development in the Middle East and Africa since 1915. For nearly 100 years, NEF has worked to empower citizens in disadvantaged, vulnerable communities. NEF field staff – all of them from the countries in which they work – partner with local organizations to find grassroots solutions to their development challenges. NEF’s “knowledge, voice, and enterprise” approach is helping build more prosperous, inclusive communities throughout the region. To learn more visit www.neareast.org