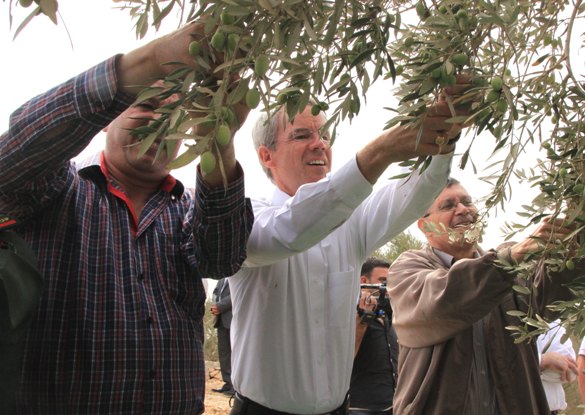 The group was welcomed by Sameer Al-Masri, a Palestinian olive grower, who gave a tour of his farm located in Salfit in the central West Bank. Mr. Ratney and Mr. Harvey also joined the Al-Masri family in picking olives that will later be preserved or pressed into oil. During their West Bank visit, the U.S. Government representatives distributed harvesting equipment such as ladders, saws and tarps to Palestinian olive farmers, which is part of a larger ‘Olive Oil Without Borders’ distribution of farming equipment for 400 Palestinian and 50 Israeli olive growers.

During the event, the American Consul General commented, “Through the ‘Olive Oil without Borders’ program with the Near East Foundation, the U.S. Government is pleased to be able to bring together Palestinian and Israeli farmers, olive press owners, and traders to build trust, mutual understanding, and collaboration through economic cooperation.”

The 2012 olive season is anticipated to produce approximately 22,000 tons of olive oil from more than 8 million trees. Olive farming is integral to the rural economy of the West Bank and an important focal point for USAID’s economic growth assistance, as well as part of its Conflict Management and Mitigation Program.

‘The Olive Oil Without Borders’ project works to foster cross-border economic collaboration between the Israeli and Palestinian olive sectors at all levels of the value chain. Over the course of the project, USAID through the Near East Foundation will work directly with 1,428 Palestinian and Israeli olive producers, 12 olive press operators, and 12 olive oil distributors to increase their income, profitability and cross-border trade, while improving the level of trust between the two sides and increasing cooperation.