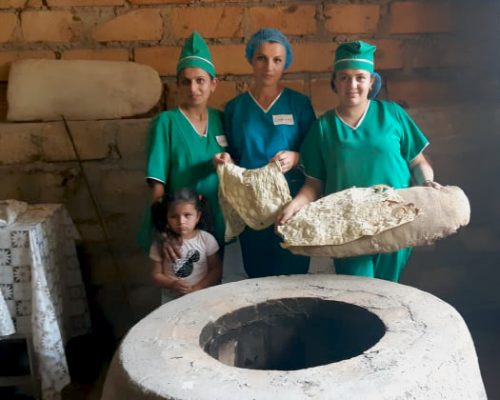 Approximately 75,000 people were forced to flee from the territory of Artsakh when violent conflict erupted between Armenian and Azerbaijani armed forces on September 27, 2020. Communities in the border regions of the Syunik province of Armenia were highly impacted. They absorbed large numbers of displaced people—many of whom are women and children— and were exposed to security risks given their proximity to Azerbaijani military units.

Nerkin Khndzoresk, a small border village in Southeastern Armenia, has hosted ten recently displaced families from Artsakh in addition to its population of around 200 residents. Since the war, agriculture-based communities like Nerkin Khndzoresk have struggled economically from decreased access to wheat and limited use of their land for agriculture due to the increased military presence and related security risks.

To help offset these impacts, with support from the Aurora Humanitarian Initiative the Near East Foundation partnered with a local community-based organization (CBO), the Taron Youth Development NGO, to establish a bakery as a social enterprise in the Nerkin Khndzoresk village.

The bakery, whose name (ՀԱՑԻ ՈՒԺԸ) translates to ‘The Power of Bread’, will boost income generation and support food security by creating job opportunities for displaced women and local residents affected by the war, providing baked goods to local schools, and helping to provide basic support for children. The design of this project allows for the bakery to earn a profit while also addressing social and economic needs in the village. As the first social enterprise and the first bakery to open in Nerkin Khndzoresk, the Power of Bread’s profits will be reinvested into the bakery as well as channeled towards the CBO’s community development activities.

During the first three months of operation, the bakery will produce 110 loaves of bread and 240 lavash daily, with half being distributed free of charge to 20 displaced and vulnerable families in Nerkin Khndzoresk and the adjacent Khndzoresk village. The remaining bread will be sold at affordable prices to local and neighboring communities. After the third month, the bakery will continue to offer subsidized bread and lavash to displaced households at a 50% discount. Extremely vulnerable families will continue to receive all of their bread for free.

Prior to establishing this bakery, bread and other baked goods were brought into the community from the nearby town of Goris. In addition to supporting local food security, the bakery is also strengthening the local economy by creating jobs and reducing transportation costs. The cultural significance of traditional baking techniques and local production is also honored through the Power of Bread. In the words of CBO president Hermine Dilanchyan, “Wheat flour of the native land has a unique vital power, which gives a special strength and energy to create and live.”

On July 23, 2021, the CBO organized an opening event that brought together dozens of people from all over Armenia to celebrate the bakery’s launch, including program supporters, invitees from educational and cultural organizations in Yerevan, the village mayor, local organization representatives, and community members at large. Attendees had a chance to tour the bakery and taste fresh bread and lavash baked by employees in the recently renovated production space. Communal dining, singing, and dancing followed the event, which was the first public celebration in the village since the war.

The event was well attended and well received, with enthusiastic residents highlighting the importance of this project. “The Power of Bread will make our community stronger,” locals noted. 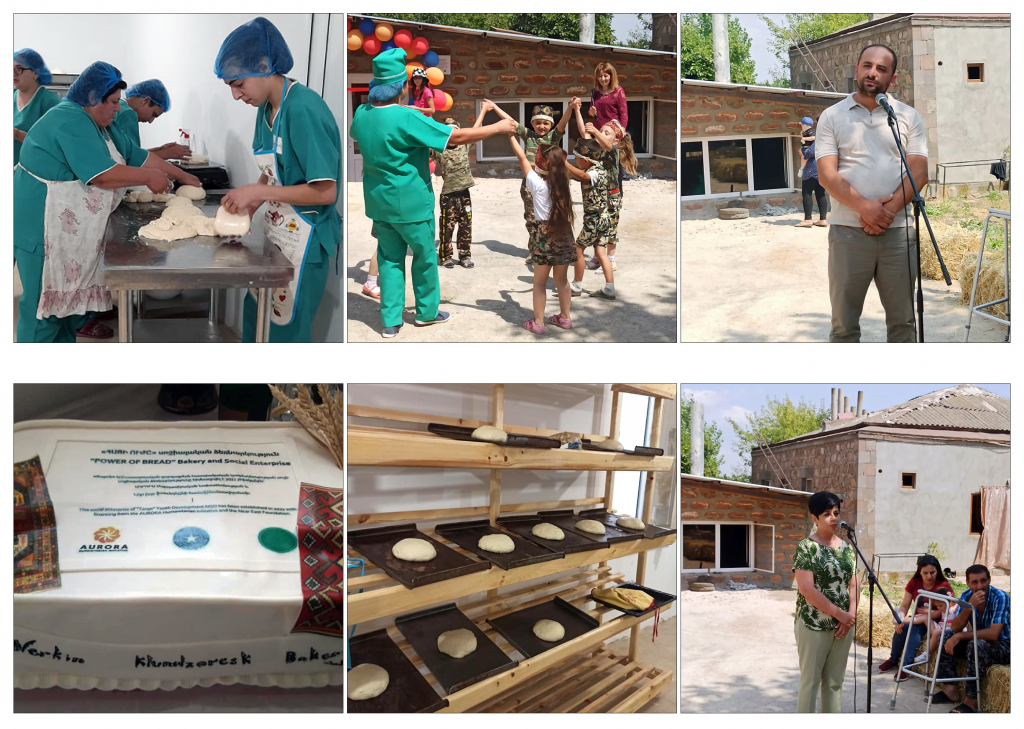