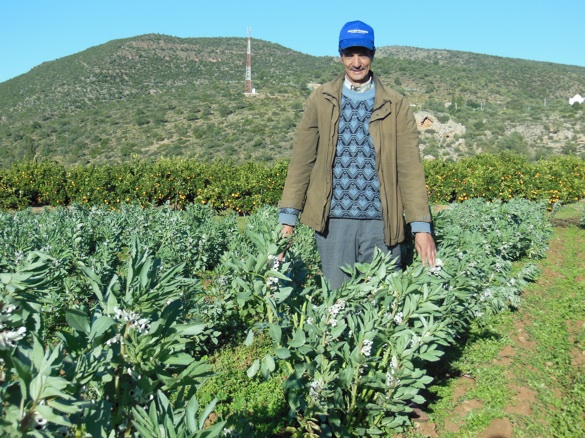 Oujda, Morocco (March 27, 2013) — In the water-scarce community of Oulad Yahya, Morocco – where people are cautious about taking new risks – farmer Amar El Akrouche’s estimated 50% water savings is serving as an example to his neighbors of how to improve irrigation efficiency and prospects for the future.

Amar is one of hundreds of farmers who have increased their knowledge and capacity with support from the Near East Foundation (NEF) through an agricultural water management project. NEF and project funder USAID are partnering with local organizations to share efficient water technologies with farmers in Morocco’s Oriental Region, an area where people largely depend on agriculture for their livelihoods.

Before participating in the project, Amar irrigated the fruit trees and vegetables on his farm through unlined canals, which resulted in significant water pumping and labor costs.

This is a common problem facing farmers in Morocco, where nearly 50% of water is lost through seepage in the generations-old traditional canal irrigation systems. Combined with the current and projected future impacts of climate change, water scarcity is a real threat to agricultural production and food security in the region.

Through the project, farmers like Amar have learned to map their water resources and received training in water conservation techniques. After realizing the inefficiencies of his current watering system, Amar sought a Moroccan government grant to support a portion of the cost of a new $10,000 drip irrigation system on his four hectares farm.

Now that the new system is installed, he reports a significant 50% water savings and additional savings in time and energy previously spent filling, opening and closing canals.

Based on his experience, at least 20 others in his village are now mobilizing to install their own systems.

The project aims to support 2,500 small farmers like Amar in 25 communities throughout the Oriental Region. This collaborative initiative is helping farmers meet their potential to increase production and income with irrigation improvements. In the long-term, it is also improving the sustainability of agricultural production by helping farmers learn to adapt to and overcome water scarcity.

The Near East Foundation is a U.S.-based international development NGO leading innovative social and economic change in the Middle East and Africa for almost 100 years. Founded in 1915, NEF has helped build more sustainable, prosperous, and inclusive communities through education, governance, and economic development initiatives. NEF field staff – all of them from the countries in which they work – partner with local organizations to implement grassroots solutions and build “knowledge, voice, and enterprise.” To learn more visit www.neareast.org.