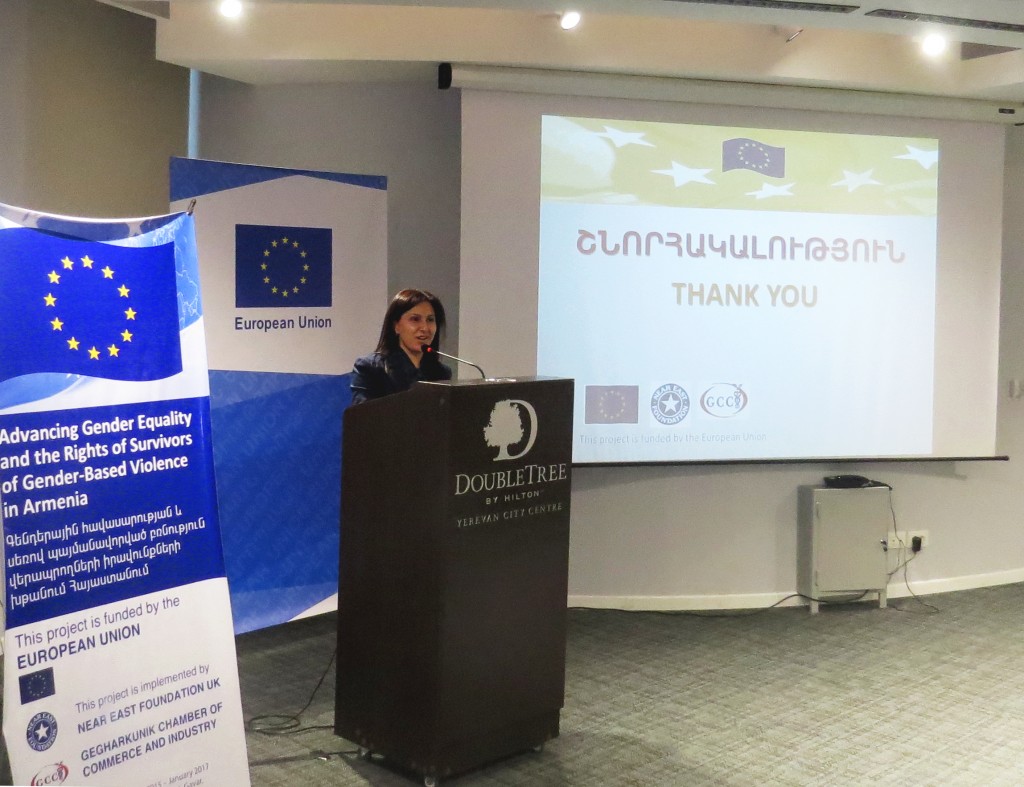 NEF UK and the Gegharkunik Chamber of Commerce and Industry (GCCI) organized a special event that included a presentation and exhibition on Advancing Gender Equality and the Rights of Survivors of Gender-Based Violence in Armenia, a project financed by the European Union and implemented by NEF UK and GCCI.

The event, held on January 18 2017 at the Double Tree Hilton Hotel in Yerevan from 14:00 to 18:00, provided an opportunity to explore the role of Armenian civil society organizations, private sector organizations, and government agencies in promoting women’s rights and gender equality among vulnerable groups of women through the delivery of economic development programs.

Ms. Line Urban, a representative from the European Union (EU) delegation to Armenia, gave opening remarks at the event where she emphasized the important role the program has played in advocating for gender equality in Armenia. NEF UK and GCCI highlighted the impact of the EU-supported project and showcased an exhibition of project beneficiary business products and services. Attendees were also able to hear directly from beneficiaries who shared the successes they have achieved through the project.

The project has helped build a commitment toward preventing gender-based violence and promoting gender equality among community leaders and employers. The partner community organizations have strengthened their cooperation and signed agreements with regional agencies in Armenia, aiming to create referral mechanisms for victims of gender-based violence.

Although the project ends on January 20 2017, NEF UK and its partners hope to find opportunities to continue this work, as it is highly impactful and required. Project’s learning, lessons and recommendations will be presented at an event in Yerevan in March 2017.