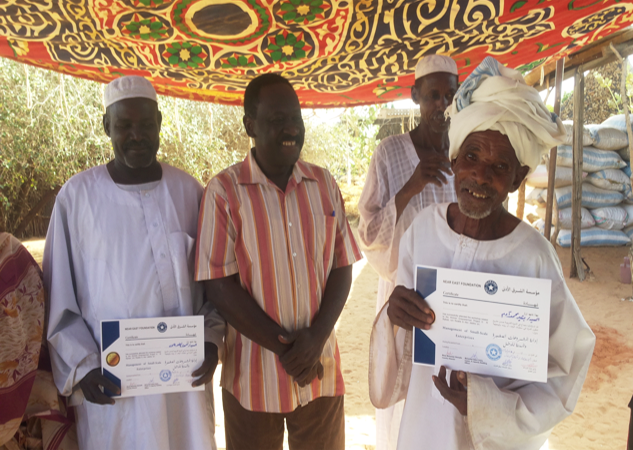 Eissa is 80 years old and a village leader in a remote village in South Kordofan. During his life, he has seen his village experience times of peace and times of great unrest caused by competition for territory and resources. He’s witnessed the resulting displacement and suffering these conflicts have caused as well as the degradation of the surrounding land and forests.

In Sudan, NEF facilitates reconciliation among groups in conflict through collaborative natural resource management. This starts with the establishment of negotiated agreements between two or more groups that define the ground rules for management and access to resources such as water points, grazing land, and migration corridors. Eissa had this to report after participating in these negotiations,

“This process has helped us as sheikhs and Omdas (village leaders) tremendously. It helped raise awareness about the importance of conserving our natural resources, especially the forests. It’s also helped us decrease the amount of conflict between the pastoralists and the farmers in the area. The pastoralists are more committed to their corridors and now keep away from the farmer’s fields.”

This has been especially important during the summer when the severe lack of water prompts pastoralists to set up camps in areas called Damras (temporary nomad villages) and utilize the established community’s water pasture for livestock and village schools for their children. Eissa explains how children are uniquely positioned to mitigate conflict in this situation. “Now students at schools, especially the children of pastoralists who are just passing by, are raising awareness about natural resource conservation and management which has helped avert unnecessary conflicts that might occur in the area.”

While Eissa is encouraged by the progress that he’s seen, he hopes that the workshops on how to negotiate these agreements will continue, “We still need more of the management of conflict over natural resources workshops because we think it can extend the knowledge for more nearby Damras in the area.”

Vital to NEF’s peacekeeping and natural resource management initiatives in the region are efforts to increase the role of women in public leadership and group decision-making around these matters. Ensuring that women have a voice in the peacebuilding process is key to achieving long-term changes in attitudes around the valuable contributions of women in their communities.

Using an inclusive approach, the agreements are collaboratively established with the help of the Near East Foundation (NEF), the National Forest Cooperation (NFC), village leaders, village women’s associations, and local authorities. With funding from Comic Relief, it has been almost a year now since these conventions were put into place in three localities, all with positive impacts.