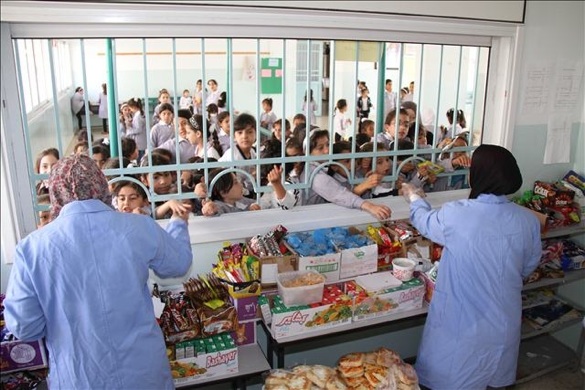 Nablus, West Bank (January 31, 2013) — In 2012, women’s associations supported by the Near East Foundation (NEF) operated a total of 57 school canteens, which collectively generated $130,000 in revenue to be divided among their women employees.

One of the canteens is located in the Madraseh al-Quds school in Jerusalem. After NEF provided training to the local women’s association, some of the women opened a canteen in the school to serve fresh and nutritious snacks to its 300 students every day – and to earn an income.

Members of women’s associations in the West Bank have learned new skills in NEF trainings – including accounting and business management – and have participated in horticulture projects. Combined, these activities have led to the creation of more than 168 jobs for women.

The Balata Women’s Society, located in the Balata refugee camp, is one of the women’s associations that has benefited from NEF training and whose members sell baked goods in a school canteen. The canteen’s shelves were once filled with candy, juice boxes and potato chips – representative of the malnutrition problem faced by an estimated 20% of Palestinian youth. Now, the canteen provides healthy alternative snacks to the children, many of whom come to school with an empty stomach.

On an average school day, the Balata Women’s Society makes about $80 by selling snacks in the canteen. The profits are distributed among the women who work there and a portion are re-invested in their women-owned businesses. Some of the proceeds are used to support women members of their associations who are facing hardship or are in need.

Learn more about NEF’s work in the Palestinian Territories