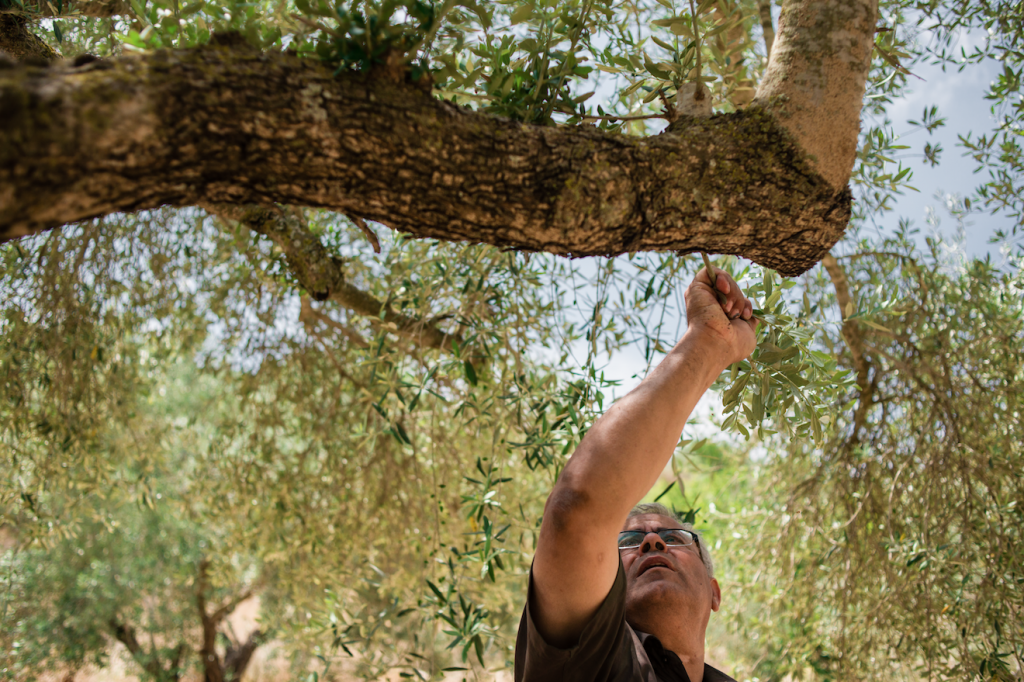 His father knew the olive trees. And before him, his grandfather. And now, he knows them, too.

Indeed, Nilham Azem doesn’t just care for these trees. He cares about them.

Azem, 59, is walking the land he farms. It’s hot. Yet on a 32-degree day in mid-June, he still wears faded black dress pants, a deep maroon button-down collared shirt and black leather sandal loafers. A film of dust coats his clothes as he trudges forward with his tree trimmers. He dresses in professional clothing — no matter the task.

Azem farms 450 olive trees in Sebastia, Nablus, in the heart of the West Bank. But he also owns an olive mill and pita bakery, harvests honey from bee cells he keeps, and has launched an enterprise to manufacture plastic bags. He visits each business in person to help and to observe the work.

As he reaches up to trim trees in his field one day, Azem says he and his wife walk through the olive groves together. His heart lies with these trees, long of his family.

But he doesn’t have access to buy more farmland — the cost of West Bank land is too much and most of it is already family-owned — so he manages his other businesses to supplement his income. And he refuses to give up the land his grandfather bought in 1935.

“Working in the land will not provide enough,” Azem says. “But I can’t leave the land.”

One olive tree produces about .001-.005 metric tons of oil during harvest, says Fares Jabi, a Near East Foundation agribusiness specialist. Oil sells at $4,000 to $5,000 per metric ton on average in the West Bank —but in 2015 it’s selling slightly higher, around $6,000. The European Union market on average sells at a lower rate than the West Bank because EU government subsidies of about $2,200 per ton offset production costs.

Azem could make as low as $1,800 or as high as about $11,250 for his oil in 2015. Weather affects crop yield, and yield affects market prices, Jabi says. And, olive trees follow an alternate bearing cycle.

In either scenario, the olive oil income often can’t cover the cost of production, much less solely support Azem’s family.

Participating in training and applying for financial support from the Near East Foundation and the Olive Oil Without Borders (OOWB) program has helped Azem improve his farm’s production, though.

He experimented with irrigation using 20 of his trees, Jabi says. NEF paid for his water costs — which has contributed to the overall 250 percent increase in olive production since the start of OOWB. Experts trained Azem and his cousin Emad Azem, 52, on methods of handling diseases and grafting as well as irrigation.

NEF and other programs designed to advance technology use in the West Bank help, but olive farmers in the region can’t buy new land to expand production because of limited availability, Jabi confirmed. So many families like Azem’s start the side businesses to pay for costs.

For Azem, his businesses offer more than just family support, though.

He employs at least 15 people in Sebastia to run his wholesale bakery, mill, beekeeping cells, and bag manufacturing plant. His bakery delivers 6,000 to 7,000 pita rounds to 32 local shops and restaurants seven days a week. In fall harvest, his mill grinds the olives of about 150 farmers across four surrounding villages. The bees he keeps produce 200 to 250 kilograms of honey for local buyers. And his bakery uses the bags he makes to distribute the pita.

“To become a well-known family inside your village, you have to serve your community,” he says.

Emad manages parts of the family businesses with his cousin. He also works for the Palestinian Energy Authority to support his own family. Emad’s five children are younger than his cousin’s — the eldest is just 15.

Someday they will learn the family businesses, he says.

“When we start a business, we don’t ever close it,” Emad says. “If it’s serving the people, then we love to do it.”

NEF offered training on tasting olive oil to determine PH levels and quality — extra-virgin, virgin and pure. Emad decided to take the opportunity to learn the skill as a hobby. He joins his cousin in a mutual love of olives.

Azem — known to friends as Abu (father of) Yousef — raised six children — two sons and four daughters. His eldest — Yousef Azem, 25 — studied computer engineering at An-Najah University in Nablus. He now works for PALTEL, a telecommunications company in Nablus. His siblings are still at home and in school.

Family tradition for Arabs in Palestine means everyone helps the businesses of their brothers and fathers. Yousef started young.

“It is natural that I will help my father,” Yousef says. “And looking in the future, I want to own my own business.”

During harvest, Yousef repairs the mill machines. In the offseason, he rotates through his father’s five businesses to take up any work the outside employees can’t finish.

And he continues his work at PALTEL.

“I’m proud to be a part of his family and his family business,” Yousef says.

Trade shows in Israel and Turkey host entrepreneurs in the region, like Azem, who want to share ideas. He travels to as many as he can to learn how to expand his businesses. And, he plans to add more.

Wiping the beading sweat from his forehead, Azem stops to look at the leaves of one olive tree. He checks for discoloring on the leaves and dark spots marring the fruit. At one time he hired people to monitor his groves. But two years ago he decided the responsibility of the trees’ care belongs to him.

He inherited the land. He builds businesses to support the income. He carries on the tradition.