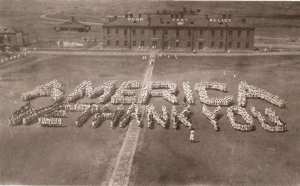 Originally known as the Near East Relief, the Near East Foundation (NEF) launched in response to the 1915 Genocide during the World War I era, when NEF’s founders established what began as a small-scale relief operation soliciting donations from the American public to alleviate the suffering of the Armenian people. As the first broad national appeal of its kind, it was unprecedented in its use of media outlets and support from celebrity spokespeople and citizen volunteers alike. The results were extraordinary: between 1915 and 1930, NEF raised $117 million (equivalent to $1.25 billion today) to help primarily Armenian refugees. Nearly 1,000 men and women served overseas and thousands more volunteered throughout the United States. NEF built hundreds of orphanages, vocational schools, and food distributions centers, and saved the lives of over one million refugees, including 132,000 orphans.

NEF was the only foreign agency allowed to operate in the Caucasus—even after the Sovietization of the region—until it was expelled in 1929. When NEF was permitted to re-enter Armenia in 2004, activities focused on improving conditions and increasing opportunities for street children. Working with the Canada-based NGO Street Kids International, NEF co-sponsored workshops to build capabilities among street children to communicate about issues vital to their well-being—such as drugs, sex, and HIV/AIDS—and to help apply their many skills—such as “street smarts,” ambition, responsibility, and entrepreneurship—into opportunities to improve their lives. Today, NEF helps survivors of domestic violence across the country achieve economic independence through employment and micro enterprise development.

Through the years, numerous organizations have recognized NEF’s legacy of service to Armenia. The Armenian National Committee of America (ANCA) bestowed the Freedom Award, their highest honor, to NEF in 2004 for “longstanding history of aiding the Armenian people and others in their darkest hours.” In 2005, NEF was recognized by The Armenian Assembly of America, The Armenian General Benevolent Union, and the Western Diocese of the Armenian Church of North America at their “International Relief, Refuge, and Recognition” event, where NEF’s president gave the keynote address. The same year, NEF’s president also delivered the keynote at a ceremony in Washington, D.C. for the Congressional Armenian Genocide Commemoration. In 2010, the Armenian Relief Society presented their “Ararat” Award of Excellence to NEF, “whose caring heart and charitable hand, extended at a critical time, helped the survival of 130,000 tragedy-struck Armenian children.” In 2014, NEF received ANCA Western Region’s Humanitarian Award in recognition of its role in providing relief to survivors of the Armenian Genocide. And in 2015, President Obama recognized NEF – known at the time as the Near East Relief – for our service in his annual April 24 statement as “…a pioneer in the field of international humanitarian relief”.