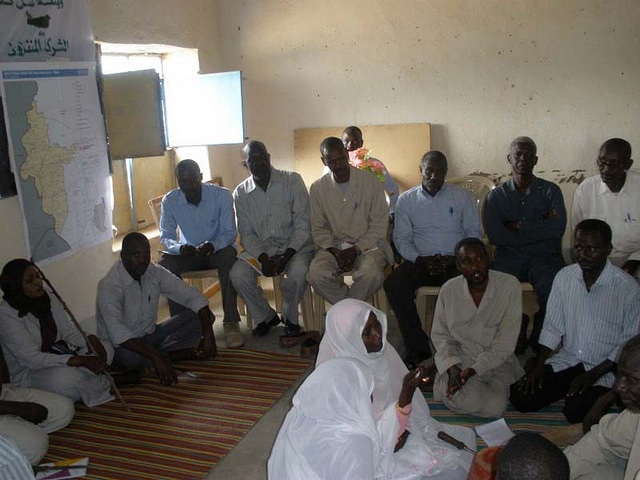 Khartoum, Sudan (January 7, 2013) — In the small village of Radom in Western Darfur, one traditional leader was able to use skills he learned in Near East Foundation (NEF) training to stop a long-standing conflict – making a small step toward building peace in the region.

The conflict, like many in the rural agricultural society, is rooted in competition over scarce natural resources like water, food and land.

It began this year when Nomadic camel herders allowed their animals to trespass in forest areas and graze on small farms, known locally as “Jabaareek.” Damage to the forest and the farms caused by the camels caused a conflict between the herders, village farmers and the village committee that governs the forests.

As the conflict was about to become physical, Omda Mahmoud, Radom’s traditional leader, was able to prevent a fight by using mediation skills he learned in conflict management training from NEF.

He is one of thousands of community members and ex-combatants that will receive similar training as part of a groundbreaking initiative to build peace in Darfur through natural resource collaboration.

“I am very grateful for those who delivered the leadership workshop,” Omda Mahmoud said. “I have really benefitted from it so much in dealing with this issue.”

Drawing on his new skills, Omda Mahmoud called for a reconciliation meeting with the conflicting parties – as well as other stakeholders including representatives from the Department of Forestry and the Ministry of Agriculture, a group of women farmers, and some influential people from the neighboring villages. Including the full range of local parties with a vested interest in the conflict and in keeping peace is a central component of the NEF training.

An agreement was reached that both resolved the immediate problem and put rules in place to prevent conflict in the future. The parties agreed that the herders should compensate the farmers and the forest committee for the damage that their animals caused. The agreement stipulates that camel herders should pass through the forest and the farmland only in February when there are no planting or harvesting activities, and no harm would come from grazing in the forest.

In the end, the process created overwhelming good feelings and forgiveness among all the parties. As an act of good will, the village farmers and the forest committee decided to waive the compensation for the damage done by the camels.

When asked how he brought the skills he learned to resolve this conflict, Omda Mahmoud replied, “I just followed all the steps I learned about negotiating, mediating and involving the stakeholders.”

Omda Mahmoud said he hopes that NEF will train more community leaders to help them deal with similar and frequent conflicts.

“I do recommend that [NEF] cover as many areas and villages in Darfur as possible, as we do need these kinds of workshops on leadership and natural resources badly. Please consider that and we will help you.”

NEF’s multi-year project is unique in Darfur because it takes a grassroots approach to building trust through collaborative, holistic management of natural resources in communities that in some cases have been in conflict for many years. The initiative will impact at least 900,000 people in 25 villages.

The Near East Foundation is a U.S.-based international development NGO leading innovative social and economic change in the Middle East and Africa for almost 100 years. Founded in 1915, NEF has helped build more sustainable, prosperous, and inclusive communities through education, governance, and economic development initiatives. NEF field staff – all of them from the countries in which they work – partner with local organizations to implement grassroots solutions and build “knowledge, voice, and enterprise.” To learn more visit www.neareast.org.