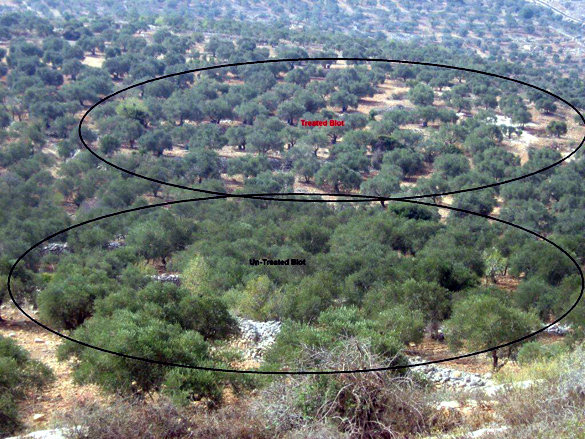 Syracuse, NY (November 11, 2011) The Near East Foundation (NEF) is leading an agricultural experiment in the West Bank to look at how different management practices impact olive and olive oil production. NEF specialists applied simple, easily replicable techniques in a 2.5-hectare pilot olive orchard in the village of Asira, near Nablus. This part of the West Bank is an important center for olive production.

In Palestine, the olive oil industry is an income source for over 100,000 families and accounts for over 10% of GDP. The one-year experiment in management techniques—such as fertilization, pest control (particularly the olive fly), soil preparation, pruning, and drip irrigation—aims to increase olive production and olive oil quality.

“Income is closely tied to production and quality,” says NEF’s Country Director for West Bank and Gaza programs. “Any improvements will have a direct, positive result for individual farmers, and for the industry as a whole.”

To implement the project, NEF is working with local partner the Palestinian Center on Agriculture and Research Development (PCARD), an organization it helped found in 2008. PCARD boasts among its members some of the foremost agricultural and rural development specialists in the region.

Working together, the partners hope the experiment will achieve a 50% increase in olive productivity and a 75% improvement in oil quality.

While the results will not be finalized until the end of the olive-harvesting season, farmers are reporting a clear change in production based on observations of their trees.

The experiment launched with a workshop gathering farmers, olive mills owners and agronomists before the 2011 growing season. Throughout the year, agricultural specialists have provided guidance on such management techniques as organic fertilizing, irrigation, tree pruning and rejuvenation. Final results will be distributed through a series of workshops (beginning in January 2012).

After the project year concludes, work will continue under a new grant award from USAID to foster cross-border economic cooperation among Palestinians and Israelis in the olive oil industry.

The Near East Foundation is a U.S.-based international development NGO leading innovative social and economic change in the Middle East and Africa. Founded in 1915, NEF has worked to empower citizens in disadvantaged, vulnerable communities for almost 100 years. NEF field staff – all of them from the countries in which they work – partner with local organizations to find grassroots solutions to their development challenges. Our comprehensive “knowledge, voice, and enterprise” approach is helping build more prosperous, inclusive communities throughout the region.