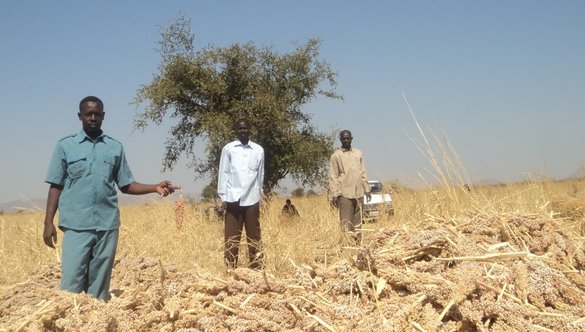 Syracuse, NY (December 29, 2011) Three-hundred farmers in South Kordofan were able to overcome enormous obstacles and harvest crops this season by participating in an emergency farming project of the Near East Foundation (NEF).

When conflict erupted in June 2011, families in South Kordofan were forced to flee their villages, and farmers never thought they would be able to cultivate crops.  The internally-displaced worried how they would feed and support their families.

Because of NEF’s emergency support, the 300 farmers had a successful growing season despite having been displaced during the time they would traditionally have been preparing and planting their fields.

When fighting subsided, NEF provided returning villagers with assistance in the form of fast-maturing crop seeds, cultivation training and support, and agricultural extension services. The resulting crops are providing food security for families in the region, which continues to face uncertainty due to periodic conflict.

Ongoing instability in the region has reduced the land available to both farmers and herders—increasing conflict as nomadic groups try to move their animals through cultivated land. NEF worked with the International Fund for Agricultural Development (IFAD) to provide tractors to accelerate the harvest, reduce further pressures on food insecurity, and mitigate the potential for conflict between herders and farmers.

In spite of the late planting, instability, and labor shortages, participating farmers were able to produce between two and five sacks of millet and sorghum per feddan (approximately one acre).

NEF continues to provide extension support to participating farmers as part of its broader program of sustainable agriculture, economic development, and peacebuilding throughout Sudan.

The Near East Foundation is a U.S.-based international development NGO leading innovative social and economic change in the Middle East and Africa. Founded in 1915, NEF has worked to empower citizens in disadvantaged, vulnerable communities for almost 100 years. NEF field staff – all of them from the countries in which they work – partner with local organizations to find grassroots solutions to their development challenges. Our “knowledge, voice, and enterprise” approach is helping build more prosperous, inclusive communities throughout the region. To learn more visit www.neareast.org