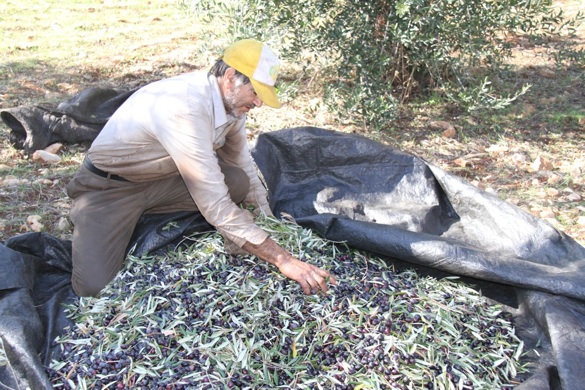 Nablus, West Bank (March 21, 2013) — In less than two months, 500 tons of Palestinian olive oil have crossed the border into Israel – the first official shipments since the border was closed to olive oil during the Intifada over 10 years ago.

The landmark shipments were facilitated by the first ever joint policy commission of the Israeli and Palestinian Olive Oil Councils. Formed with support from the Near East Foundation and USAID through the “Olive Oil Without Borders” project, the commission has been meeting since October 2012 to find ways to remove obstacles to cross-border trade.

The result is a groundbreaking agreement that allowed cross-border trade of olive oil beginning in February 2013. The new trade agreement promises to have a dramatic, positive, and immediate economic impact in the Palestinian Territories. Olive oil is a major agricultural crop and source of income for Palestinians, who produce an average of 22,000 metric tons of the product each year.

Since the Intifada, potential markets for Palestinian olive oil have decreased significantly – including the market in Israel, the most convenient and least costly export market for Palestinian products based in part on geography and consumer demand.

In the first week, Palestinian traders purchased more than 200 metric tons from farmers and mills in NEF partner communities to sell to Israeli bottlers and distributors.

The “Olive Oil Without Borders” project is a multi-year initiative funded by USAID and implemented by an NEF-led consortium to create opportunities for cross-border economic cooperation in the olive oil industry. Partners in this policy initiative include the Palestinian Center for Agriculture Research and Development (PCARD), the Israeli Crossing Authority, and the Palestinian Ministry of Agriculture.

Learn more about NEF’s work in the Palestinian Territories