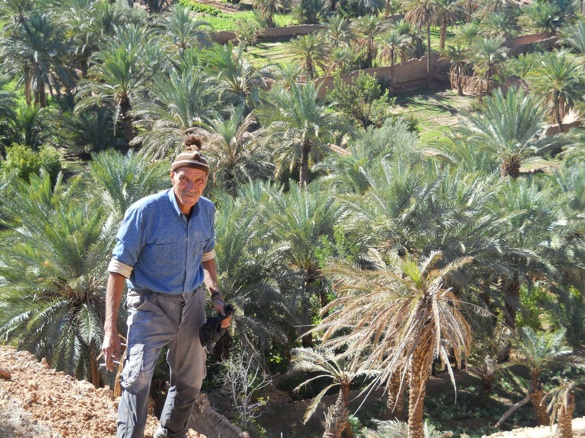 With support from NEF, water is flowing again in a community irrigation canal for the first time in seven years.

Oujda, Morocco (December 17, 2012) — In far eastern Morocco, farmers in the agricultural community of Zenaga had not seen water in their irrigation channels for seven years.

The primary irrigation canal that transports water from the local spring through a series of channels to the planted areas in Zenaga – located in the desert oasis of Figuig near the border with Algeria – was clogged and had so many leaks that it was not functional.

One farmer, Mahrzi Abdi-Salam, paid over $1,500 a year to import water to maintain his palm trees, which produce the dates he sells to support his family.

The farmers in Zenaga knew that the canal needed to be repaired, but tensions among the group had prevented collaborative action.

In 2011, the Near East Foundation’s Agricultural Water Management (AWM) project began working in the area. This USAID-funded project brought farmers together to discuss water challenges and develop community solutions to improve management of their limited water supply.

Farmers received training in communication, conflict management, and water management strategies, building their capacity to work collaboratively and address challenges in their fields. They participated in a community mapping activity where they discussed challenges and opportunities in the management of water for agricultural activities.

As a result of these trainings, Mahrzi worked with other farmers who shared his vision to develop a proposal for the rehabilitation of the old underground irrigation canal that serves the community. The participating farmers received a grant from NEF to cover the majority of the canal repairs; they personally contributed 25% of the approximately $12,500 in project costs.

Within months, the rehabilitation project was completed and now water flows to the fields in Zenaga for the first time in seven years. Mahrzi not only has sufficient water for his date palm trees, but he is also planning to introduce new crops. He no longer pays to import water and estimates that with the increased irrigation his date production will double—to 1 ton of dates on a 2.5 hectare parcel.

Even neighboring farmers who were skeptical of the rehabilitation project at first have witnessed the dramatic transformation in Zenaga. Now receiving water on their parcels, these farmers have offered to contribute to the rehabilitation work that was completed, reimbursing lead farmers who made the initial payments.

During the two-and-a-half year water management project, NEF and its local partners aim to provide 2,500 farmers in 22 villages with training in efficient water management and to help them increase agricultural production through simple, accessible new technologies.