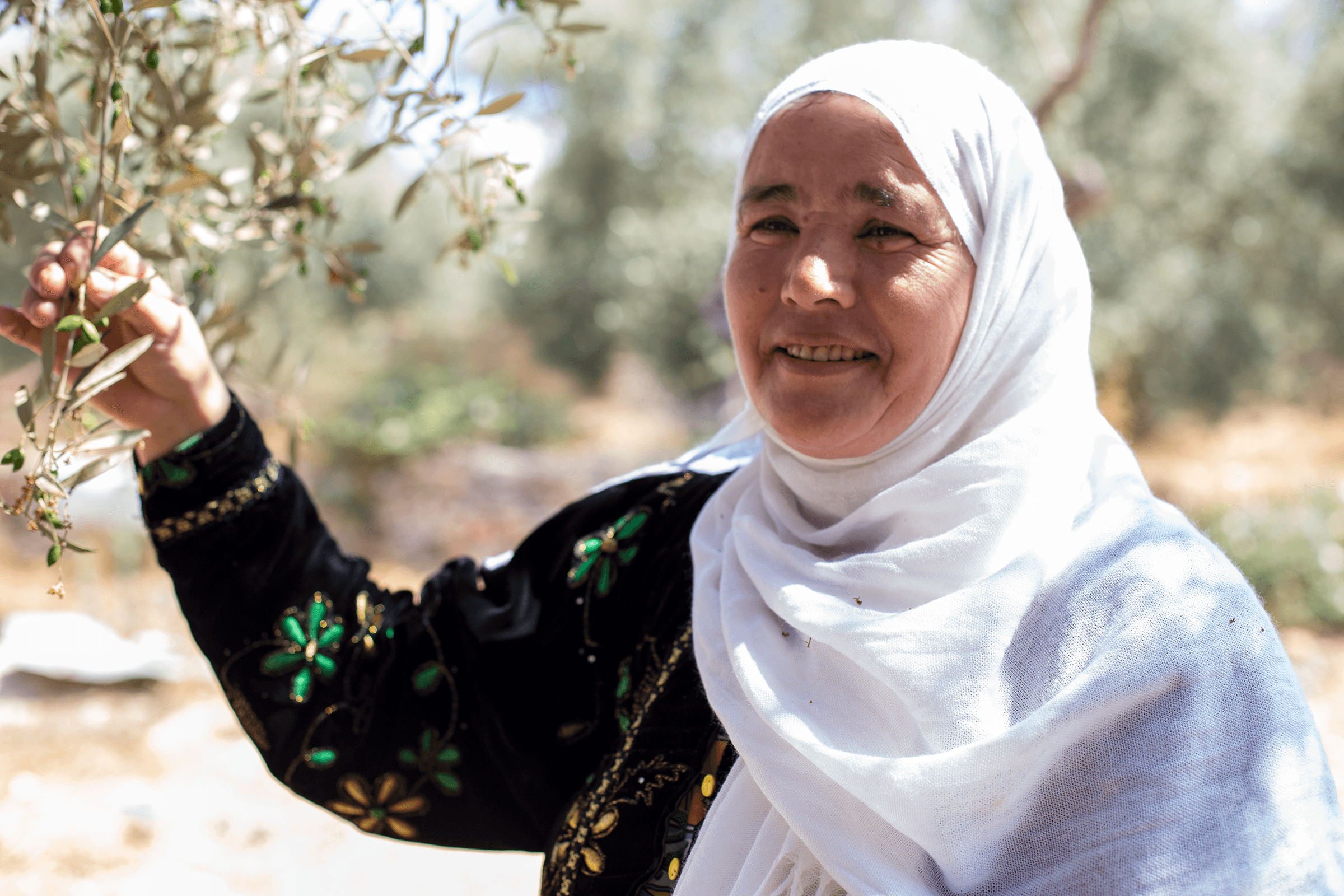 Olive farmer Myasar has had to step into the role of provider for her family and in doing so has discovered her aptitude for business. 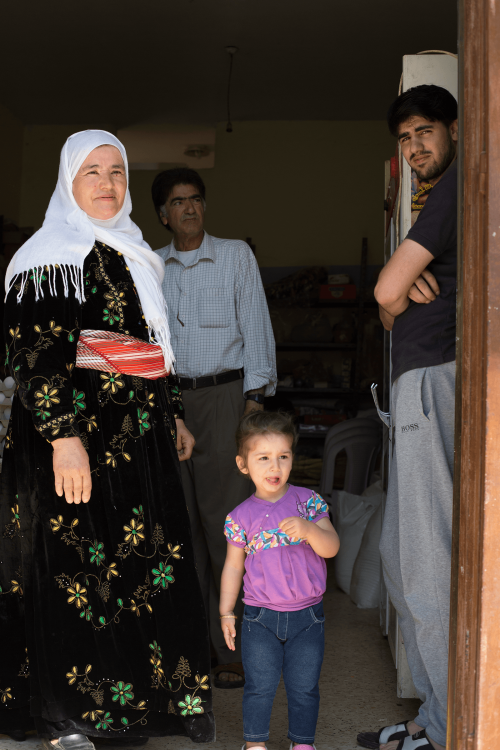 She is an olive farmer. And a soap-maker. And a community leader. And no stranger to hard work.

Myasar does what’s typical of a Palestinian housewife with children: She assigns one of her younger daughters to clean grape leaves that will be stuffed with rice, she cleans olives from the family farm to serve guests, and she makes sure to sweep the front porch of her house.

She is also among the 21.5 percent of women who work in the agricultural sector in the West Bank, according to Palestinian Central Bureau of Statistics (PCBS) 2013 data. She is part of the 17.4 percent of women who participate in the workforce, which the UN says is much lower than the rest of the Arab world, where the number of women in the labor force is usually around a quarter of the population.

Myasar is also in an even smaller class.

While the numbers of women in the agriculture business might be as modest as Myasar’s backyard farm, she’s found a way to support her family with this and her at-home businesses. 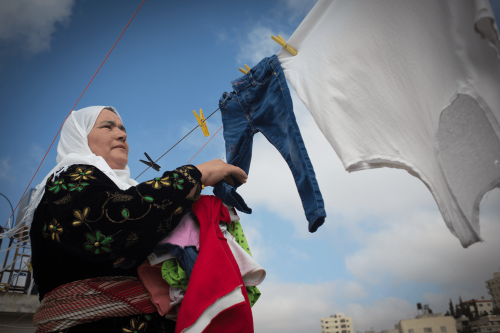 Myasar’s agriculture business, especially olive oil, has blossomed. Unlike many other farmers, she’s able to live off what she earns from her extra virgin oil. Since the beginning of this year through June, she had earned 30,000 shekels, which totals almost $8,000. That’s 58 percent more than the average Palestinian worker would have made by then, according to the most recent wage averages reported by the PCBS.

Myasar has been able to flourish because of her participation in Olive Oil Without Borders (OOWB). Since its launch in 2011, OOWB has cross-trained over 3,000 Palestinian and Israeli farmers.

Myasar heard about OOWB after attending a local training session where the Near East Foundation was teaching farmers how to make organic fertilizer.

“Olive Oil Without Borders helped me a lot through the technical training, from tasting olive oil to recognizing the extra virgin oil, and composting,” she said. “The taste issue is really important because when we export this oil to Europe, for example, the label specification needs both the lab examination for PH (acidity) and the taste verification.” (Extra virgin oil has the lowest PH levels.) 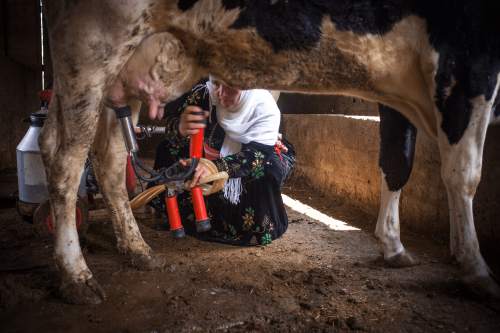 Myasar has participated in ten trainings in Israel since joining OOWB, and she has earned a certification in olive oil tasting.

The quality of her oil has improved, gaining the attention of Canaan Fair Trade, a Palestinian-led company that trades olive oil from small villages like Myasar’s and ships it to the United States, United Arab Emirates and other parts of the world.

Myasar estimates that her land produces about 120 to 150 tanks of oil per year. Each tank weights slightly over 35 pounds.

Because her 13 acres of farmland are bountiful, Myasar keeps family members and five employees busy in the fields every day. She pays her employees 100 shekels per day, more than the 89 shekels that the average agriculture worker made in 2013, according to the PSBS. She also provides her workers with meals when they break and offers them crops like her olives in addition to what she prepares for them.

Myasar has known all her employees since they were children, she said.

“I selected them since I’ve known them for years. And, they are happy with me so they will not leave to work at another farm.” 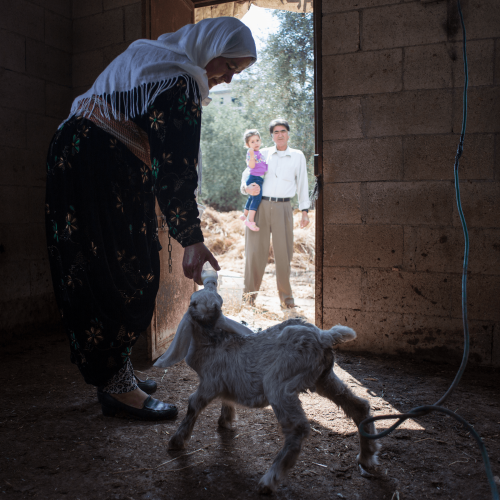 While Myasar’s olive oil farming is doing well, she has found other ways to generate income for her family as the main provider.

The first level of her home, which was designed by her husband and his brother, hosts a shop that she started in 1999 to sell her soap products and other goods. The second level is her family’s living space, where she treats guests to olives from her farm and her homemade cheese in her living room.

Just around the corner, her kitchen serves as a place for her two teenage daughters to pitch in with household chores as Myasar multitasks between making soap and cheese.

“I wanted to work and to create this business since my husband is sick and I needed to find new sources of income for my family,” she said. “If my husband worked, circumstances would be different.”

Her husband, Mahmoud, 64, has a damaged cornea as the result of diabetes. About 10 years ago, he noticed that his vision was deteriorating, so he saw a doctor.

His vision has improved and his blood sugar levels are now normal, but without glasses, everything is still quite blurry.

Seeking higher education has been what most of her children have done. Myasar herself has a two-year degree in psychology and she was a teacher in Saudi Arabia for a time before settling in the West Bank. 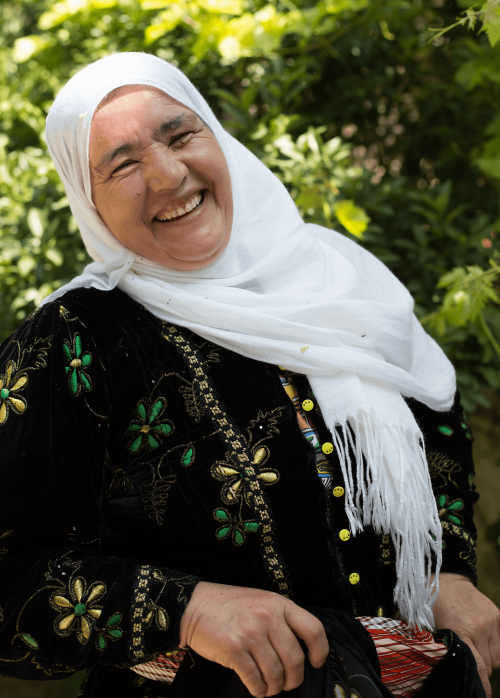 Out of her eight children, six either have bachelor’s degrees or are in the process of receiving one.

“I’ve been a farmer since I was a baby,” he said. “My mother was taking me to the field”

Myasar smiled at her son, both with pride and amusement.

“The women here work at the farm even when they are pregnant,” she said. “I delivered my baby after picking olives all day.”

“Our mom is the best role model for us. I’d like to be like her,” said Karmen, blushing with embarrassment and admiration for her mother. “I always want to be close to you and to the land, especially the olive fields.”

“Everything (about) olive trees is great and blessed: the oil, wood and olives,” says Karmen. “We can benefit from everything. And we are growing with the olive trees.”